Bringing aesthetics back in pediatric dentistry

Main complaint: the complaint from the parents was that the child had weak and brittle teeth. The aesthetics of teeth 61, 62, 51 and 52 bothered a lot, specially in photos. They also related behavior issues and the search for a treatment without physical restraints and ended up using sedation.

Conscious sedation is a technique in which one or more drugs are applied to produce a light depression of the central nervous system, without loss of conscience, in a way that the verbal contact with the patient is maintained at all times; that allows for certain dental procedures to be carried out. The technique has been associated to a large safety margin (AAPD, 2011-2012).

The directives of the American Academy of Pediatric Dentistry consider it to be a safe and efficient basic control technique which allows for the reduction of the child’s anxiety and promotes communication between the professional and the patient.

The technique is described as a “standard technique” for pediatric dentistry and as a successful procedure in 90% of the adequately selected patients.

Anxiety and fear associated to dental treatment are routine situations in the practice of the professional dentist. Therefore, a efficient and safe procedure require a modification in the behavior of the pediatric patient for the reduction of the stress and of the perception of pain during treatment, creating an environment where the child will learn to cope with their fears and anxieties (AAPD, 2011-2012).

According to the American Academy of Pediatric Dentistry, the conscious sedation is recommended for patients that are little cooperative and/or very anxious with the purpose of minimizing the physical discomfort and the pain control the anxiety and the behavior of the child, avoid psychological trauma and potentialize the amnesic effect, guaranteeing their safety and wellbeing besides controlling the movements for a safe and efficient procedure that also allows for the recovery of the initial conscience state.

Initial clinical/radiographic evaluation: On the day of the appointment, the professional carried out the anamnesis together with the clinical exam. Cavities were found in several deciduous teeth, however there were no fistula or report of painful symptomatology. After the exams, the mother requested for the maintenance of the anterior teeth until the natural exfoliation

Treatment executed: The treatment proposed was divided into two phases, initiating with the aesthetic phase of the upper teeth..

First, the patient was conditioned by means of the enteral sedation using midazolam, for conditioning and relaxation. 15 minutes later, he was already very calm. After that, a nasal mask was placed for the inhaling sedation, the proportion being 40% nitrous oxide and 60% oxygen.

Before the beginning of the procedure, the patient was monitored for 10 minutes through a table oximeter, period in which a resting saturation with SpO2 of 99 and a heartbeat of 112bmp were observed.

The professional then carried out the prophylaxis, followed by the direct restoration protocol with relative isolation with the use of the composites Opus Bulk Fill Flow APS and Opallis B 0.5, in one session on teeth 51, 52, 61 and 62. A dental mouth opener was not used in order not to waken the patient up.

Figures 1 and 2 – Periapical radiography of the anterior upper teeth.

Behavior conditioning: after the sedation of the patient, the relative isolation was made with cotton rolls. Due to the sedation technique, it was possible to better control the dryness of the operation field. 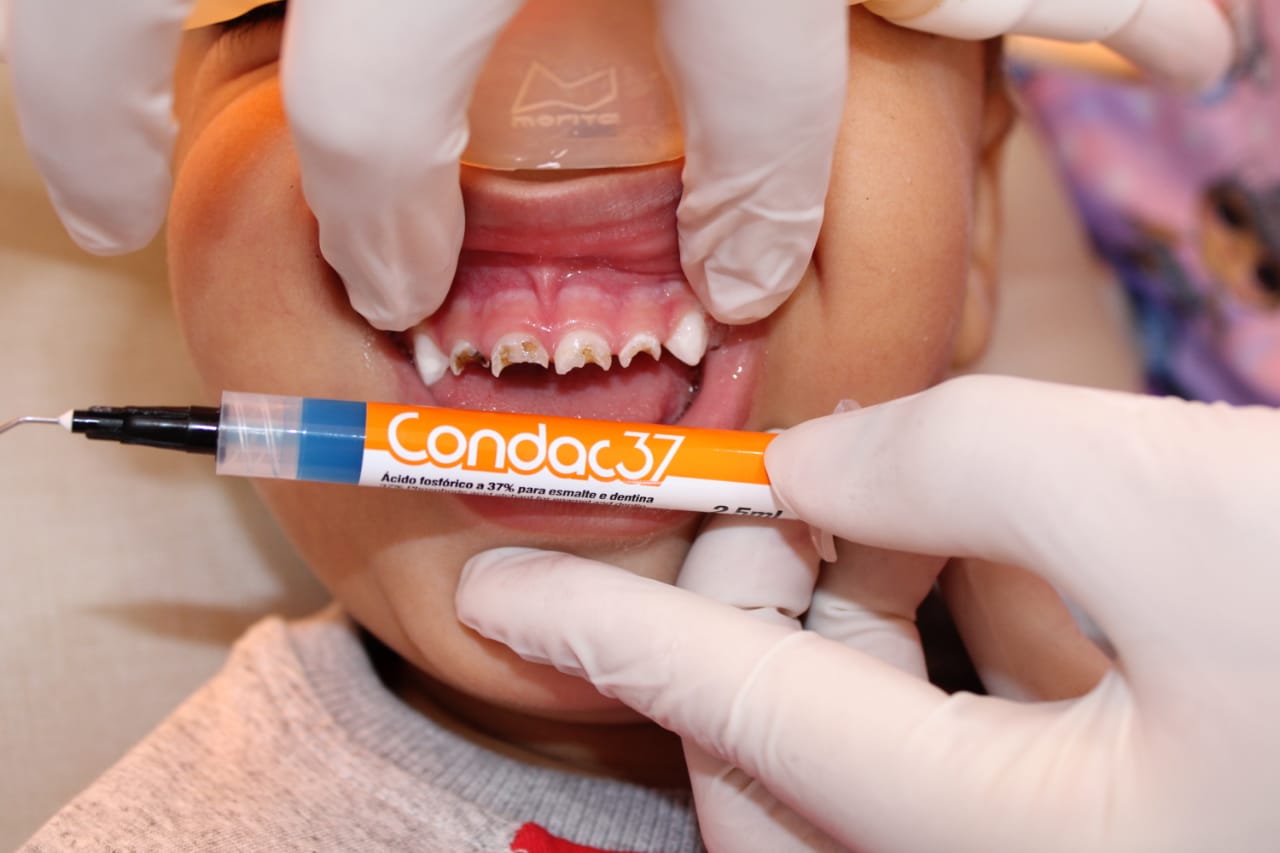 Figure 4 – Acid etching with 37% phosphoric acid (Condac 37 – FGM)for 20 seconds on the enamel and 15 seconds on the dentin. After that, washing and drying followed with air jets form a distance. Then, the professional applied the Ambar APS (FGM) adhesive in two layers, also using air jets from a distance and photopolymerizing for 10 seconds.

Figure 5 – Filling in of the incisal and vestibular cavities of teeth 52, 51, 62 and 61 with Opus Bulk Fill Flow APS A1 composite and photopolymerization of each area for 20 seconds.

Figure 6 – Filling and sculpting with Opallis B 0,5 composite, respecting the anatomy of the teeth, with the help of a fine brush, photopolymerizing each area for 20 seconds. After that, the finishing and polishing were carried out with Diamond Pro (FGM) polishing disks in a faster manner because the patient started to be more agitated since the peak of the sedation had already passed. Therefore, the following procedures were scheduled for the following session.

This clinical case involves a pediatric patient, with previous diagnostics of exodontia, for being the easiest solution for a great discomfort, specially for the patents, with the look of the child’s smile. The plan was determined after the verification of absence of infection or inflammation, absence of pain symptomatology and the study of the X-ray.

It is possible to verify the advantages of the sedation in odontology as a great ally in the behavior control of children with previous traumas. Besides, sedation is also a great ally in giving back the smile aesthetics for the pediatric patient, especially due to the tranquility for the procedure. It also contributes greatly to the durability of the results, the maintenance of a dry and controlled operating field – one of the greatest difficulties in pediatric dentistry -, the optimization of chair time for the patient, absence of traumas, reduction of the use of local anesthesia and creation of confidence bonds with the professional; all of that without the application of imperative means.

Furthermore, the use of easily-handled restorative materials, such as the ones used in the patient’s restorative treatment, allow for something that is really complex in pediatric dentistry: the little time we have for the restorative protocols as well as the non-collaboration from pediatric patients. The choice of the material is crucial for the optimization and success in the treatment thanks to the low polymerization contraction and tension rates, the easy insertion and fitting, specially for the filling of cavities up to 4mm deep, in those more difficult patients, even with the use of sedation.

The composites used allowed for more work time under lighting and a great consistency for the manipulation and assembly of the anatomy of the deciduous teeth. With the complement of Opallis B 0,5 composite, it was possible to reach a whiter tone that was more similar to the natural color of the other deciduous teeth, as it was the desire of the parents. 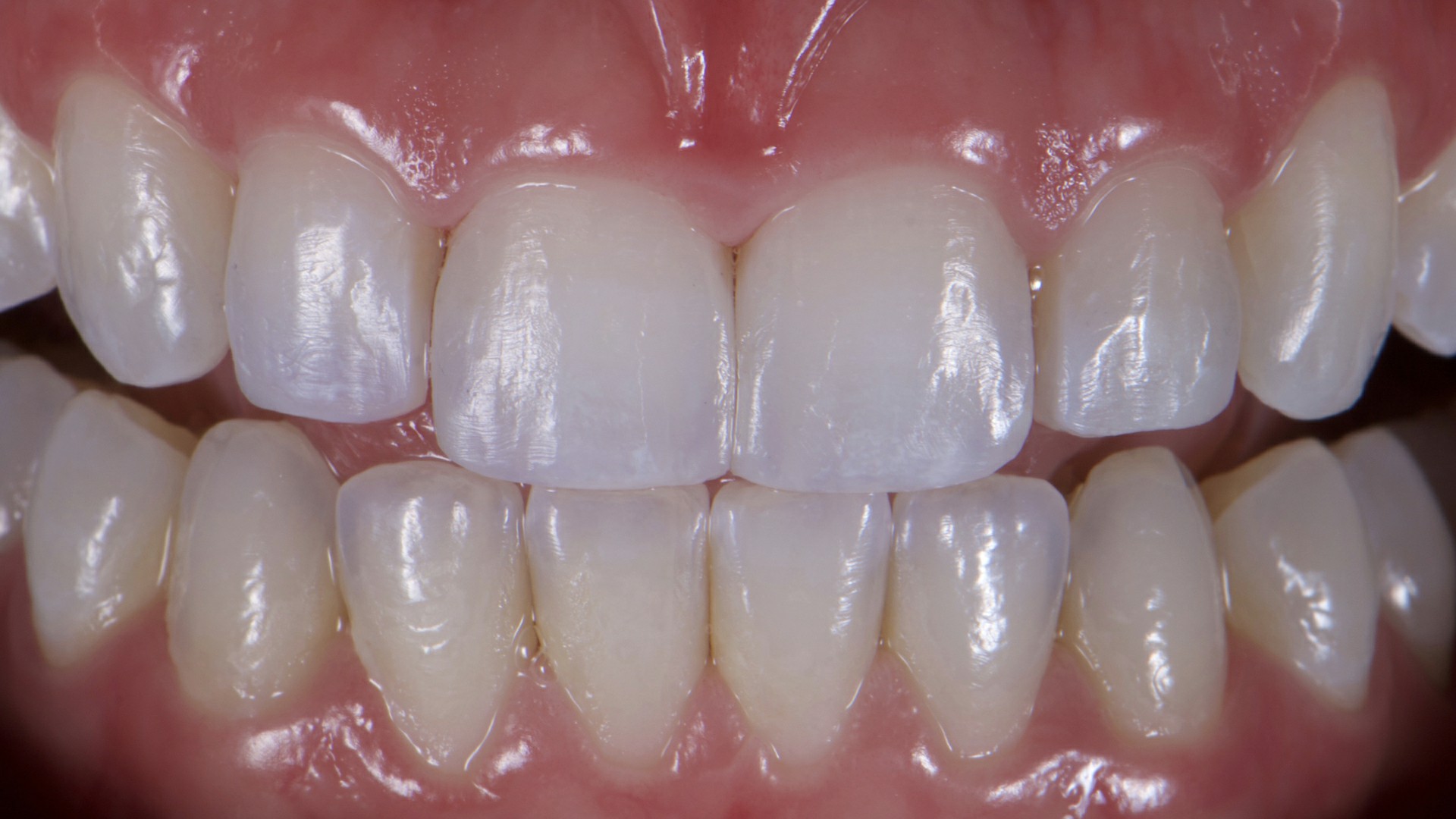 Bringing aesthetics back in pediatric dentistry